What You Should Know About the Lhasa Apso Dog

Small, non-sporty, playful, and loyal is the perfect description for the Lhasa Apso dog. Originally from Tibet, these dogs were bred to be royal watchdogs because of their alertness and natural curiosity.

The Lhasa Apso as mentioned already originated in Tibet a region in the Himalayas. This region is known for its extreme weather conditions of very hot summers and long chilly winters. Lhasa Apsos owes most of its traits to these weather conditions as they have evolved perfectly to fit into just about any climate.

For over 2500 years, this dog has been bred exclusively for use by royals and monks as inside guard dogs. Having connections with Buddhism, it is also known as the “lion dog”. It is also a revered dog by Lamas (Tibetan priests) who believe that they are reincarnated as Lhasa when they depart from this world through death. Click here to learn more about other dog breeds native to Tibet.

Apsos were so highly regarded that it was almost impossible to own one if you lived outside the region of their origination. This is because no one was allowed to carry them outside of the country unless they were gifted by the Dalai Lama. From way back as 1583 when the Manchu Dynasty began, the Dalai Lama ruling at every given time sent Apsos as sacred gifts to the Emperor of China. They were believed to bring good luck and were sent in pairs.

READ MORE:  Are you Looking to Settle your Gold Loan? Here are Four Ways to Ace it

It was until 1933 that the lion dog found its way into the United States. It’s coming to the U.S. is credited to C. Suydam Cutting, a renown traveler, when upon his return to the U.S from his visit to Tibet was gifted a pair of the sacred dog by Thubten Gyatso, the 13th Dalai Lama. In 1935, the American Kennel Club officially accepted the Lhasa Apso into the Terrier Group but it was later transferred to the Non-Sporting Group in 1959.

The Lhasa Apso temperament is quite an interesting mix. It is as playful as it is mischievous. Although a small dog by all standards, it known to be independent and fierce. Its fierceness often comes as a surprise to many due to its small size and cute looks.

They are loyal and very affectionate to their owners but are always suspicious of strangers. Because of their natural curiosity and sharp bark, they make excellent indoor guard dogs.

The lion dog can easily be recognized by its all-encompassing coat that grows on every part of its body. They have very long eye lashes that help to keep the hair that grows over their head away from their eyes. This coat is double layered with the outer layer resembling human hair; hard but not coarse. The inner coat changes with season or climate. They become denser in cold climates and thinner in hot climates enabling the breed to survive in just about any climate.

Being small dogs, the Lhasa Apso typically grows to 10 or 11 inches at the shoulder level. The weight range for mature Apsos is between 14 and 18 pounds (6.5-8kg). Females being slightly smaller weigh between 12 and 14 pounds (5.5-6.5kg). Their coats can come in a variety of color including white, black, red, and gold. They typically have dark brown eyes and a black nose. 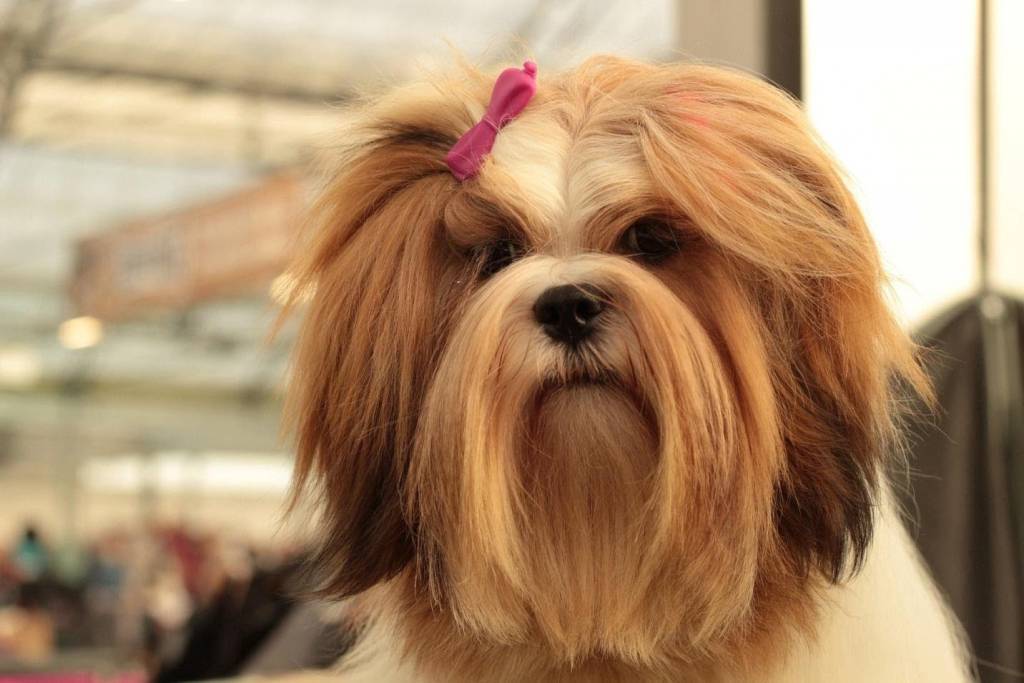 If you’re planning on getting an Apso, you should definitely factor its care and grooming because this dog requires a lot when it comes to grooming. They have a very thick coat that will grow to cover their body if not timed down. Their coat requires frequent brushing to keep them from tying up and to prevent ticks. Tending to its coat may be less stressful if it is trimmed every few weeks but if you fancy them long, be ready to become a full-time dog groomer.

A Lhasa should be fed at least twice a day to keep them in shape. Each meal should contain half a cup of dried dog food to get them all the nutrients required. Bear in mind that how much they eat will be influenced by their age and their activity level. Make sure to regularly check your dog’s weight because the life expectancy of small dogs can be affected if they put on weight.

READ MORE:  Does the mascara help in flaunting the makeup look?

A Lhasa usually has a mind of its own and will most times do what it pleases. It has also been found that these dogs take time to mature even after growing to its full size. Because of these tendencies, Apsos require extensive training. Being naturally protective and suspicious of strangers, they should be made to socialize right from puppyhood so that they are comfortable in different types of situations.

The lion dog is perfectly suited for city apartment life because of they are small and not prone to separation anxiety. If you own one however, be prepared to deal with its bark because Apsos are known for barking sharply at strangers and in reaction to noises. Visit https://www.quickanddirtytips.com/pets/dog-behavior/how-best-to-train-small-dogs to learn more about training small dogs like the Lhasa Apso.

Read More:  A Guide To Help You With Everything For RO Vs UV Vs UF

Lhasa Apsos are generally incredibly healthy dogs and can live up to 15 years if properly cared for. However, they may suffer some hereditary health problems like dislocation of the knee (patella luxation), dry eye (keratoconjunctivitis sicca), and herniated spinal discs (intervertebral spina disease).

This breed of dog is known to be favored by many celebrities because of its regal qualities and background. One popular celebrity that owns an Apso is the Glee star, Jane Lynch.

What Are Steps To Encourage Organizational Culture Transformation

What Are Steps To Encourage Organizational Culture Transformation

4 Things You Need To Know About Operational Analytics

4 Things You Need To Know About Operational Analytics

Which is better for you? Physiotherapy or Massage Therapy