Teams With The Best Win Percentage In IPL History

Do you wish to know about the teams with the maximum winning percentage in the IPL? Here’s a quick look at the information you need to know.

2021 marks the onset of the 14th edition of the IPL, where 8 teams will go up against each other to win the IPL title. Mumbai Indians are the defending champions, and they are also the favorites in the Indian Premier League 2021 because of their strong squad. But despite winning so many IPL games, they do not have the highest winning percentage, which is pretty shocking. There are quite a few other teams, who have made a mark when it comes to winning. In this article, you will learn about the winning percentage of IPL teams within the history of the Indian Premier League. 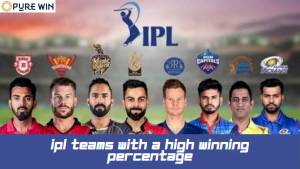 Chennai Super Kings or CSK is one of the most successful teams in the Indian Premier League. CSK is led by MS Dhoni; an extraordinary captain within. The men in yellow won three IPL titles, which are in 2010, 2011, and 2018.

The team also won 2 Champions League titles and is dubbed as the best team within the league so far. They have played 186 matches, won 111 games, and lost 73 of the matches. CSK has a win percentage of 60.27%, which is the highest winning percentage in IPL history. Suresh Raina is currently the top run-scorer, and R Ashwin is the leading wicket-taker of the team.

The Sunrises Hyderabad or SRH was introduced to the Indian Premier League as a replacement for the Deccan Chargers. Although the Orange Army doesn’t have many victories, they are considered one of the best teams in the league. They also have a win percentage of 51.9% and are captained by New Zealand’s Kane Williamson. SRH has won one IPL title, and it was in 2016 under the captaincy of Australian batsman David Warner. They were also the runner-up for the 2018 IPL season. Sunrisers Hyderabad has played 133 matches, won 66 out of them, and lost 61 of the games.

KKR or Kolkata Knight Riders is in the 3rd position with a winning percentage of 51.25%. The team has won 2 IPL titles in 2012 and 2014 and also has qualified for the playoffs in 2011, 2016, 2017, and 2018. English cricketer Eoin Morgan currently captains the KKR side. The team also holds the record of having the most-number of consecutive wins in the Indian Premier League. Kolkata Knight Riders have played 199 matches, out of which they won 100 of the games and lost 99.

Rajasthan Royals were the winners of the 1st IPL season in 2008. Under the captaincy of Shane Warne, the team played brilliantly. They were in the 3rd position in the 2013 IPL season. The team has also played during the playoffs of the 2015 and 2018 IPL seasons. RR or Rajasthan Royals have a win percentage of 50.3%. Although they didn’t get the chance to obtain their 2nd IPL win, this year, in the 2021 IPL, they are surely preparing themselves well to obtain the title.

So, here are some of the top IPL teams with the highest winning percentage within the league’s history. Each team has strong and the best players and will surely do well in the upcoming 2021 IPL matches. For more news and updates about the 2021 IPL season, check out Pure Win News.

We help sports lovers to stay tuned on everything latest in the sports club. We object to providing important updates regarding information of  sports news with upcoming matches details, schedules, score and result for the most well known leagues like the IPL,CWC, Hockey India League, Pro Kabbadi League and many others.

Our news platform helps the visitors to know what’s going on in the sports and teams. From die hard fans to players and managers, everyone loves staying connected with Pure Win News for the latest sports buzz!

READ MORE:  Introduction: What is a Sports Podiatrist?

Introduction: What is a Sports Podiatrist?

Introduction: What is a Sports Podiatrist?

The 7 Best Golf Clubs for Beginners to Use

The 7 Best Golf Clubs for Beginners to Use